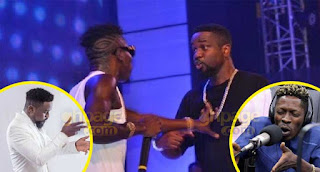 Sarkodie after days of silence has hit back at Shatta Wale for disrespecting him by calling him poor and an artist riding on past glories.
King Sark threw serious and damaging jabs at Shatta Wale in the remix for Medikal’s “How Much” song which he together with Paedae were featured on.
After bragging about his position in the rap game in his verse, Sarkodie descended into the gutters with Shatta Wale.
Sarkodie born Micheal Owusu Addo asked Shatta Wale to put respect on his name because he even started charging a half a million for shows before Shatta Wale even dreamt of resuscitating his dead career as Bandana so he has no damn right to describe him as poor.
That part of his verse reads:

“…put some respect on my name nigga; cus you and me are not the same nigga. Wo pushi Picanto no na me pushi Range nigga. I started charging half a million before you came in nigga! ..”,