Nigerian billionaire daughter DJ Cuppy, has reacted after American music star, Kanye West claimed he was stopped from entering his estranged wife, Kim Kardashian’s house to spend time with his children, in spite of being the richest black man.

During Kanye West interview on Hollywood Unlocked which is hosted by Jason Lee.

“Earlier this week, Monday, when I went to go pick my kids up from school, the security stopped me at the gate.
So at that point, security was in between me and my children and that’s what was not going to happen.

But I didn’t want to argue about it. So I just chilled, took my kids to school, and then took my kids back.
I am driving. I bring them back and North was like, ‘I want you to come upstairs and see something.’

“My daughter wanted me to go inside.
I was like, I am the richest Black man and North’s father, right, and the security was able to stop me from going into the room with my daughter and that had not been defined.

And I am hearing that the new boyfriend is actually in the house that I can’t even go to.
And that’s where I call my cousins. And my cousin is real opinionated, you know that. And I said, ‘I need you to go and say these two things.’

However, DJ Cuppy while reacting to this, noted that though she is a fan of Kanye but her godfather, Aliko Dangote is the richest black man.” 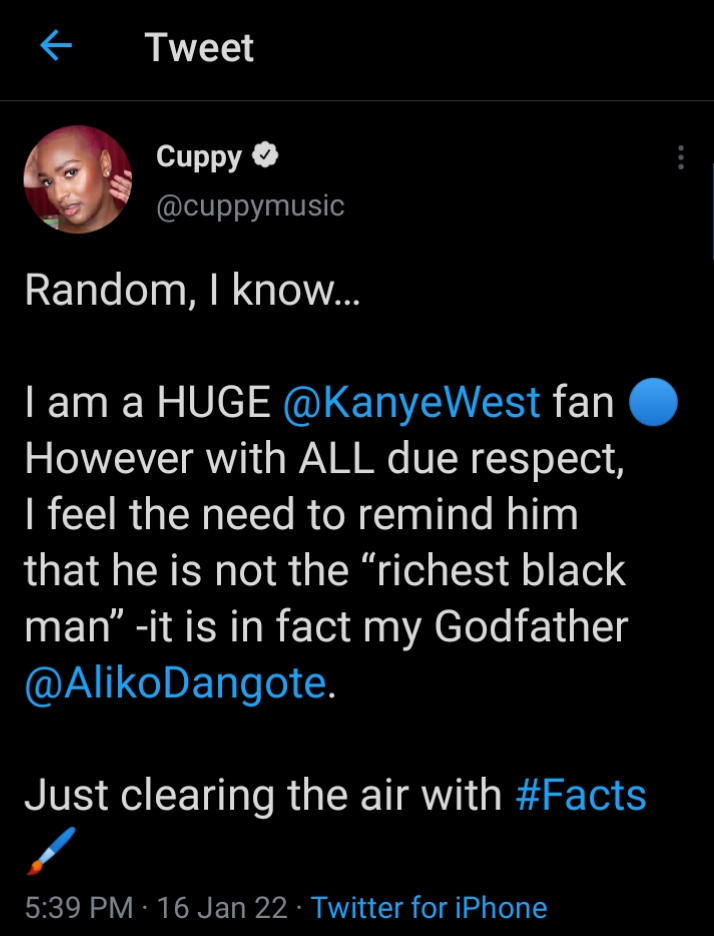 My name is Smile Iliya Agwom also known as Mex, I'm a blogger, web designer and a promoter from Plateau state Nigeria.

2021 was the most depressing year in my career – Promphizy revealed

KID CUDI CALLS ‘ENTERGALACTIC’ HIS ‘GREATEST’ WORK YET: ‘U HAVE NO IDEA WHAT UR IN FOR’