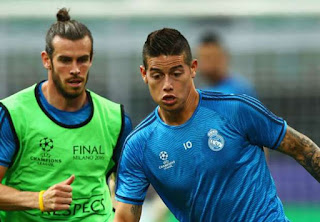 Zinedine Zidane welcomes back a host of injury casualties for the last game of the campaign in a bumper squad, with Dani Carvajal also returning Gareth Bale and James Rodriguez are back in the Real Madrid squad as the Merengue face Malaga in a match that will decide the fate of the entire La Liga season.

Bale has been out of action since April with a torn calf, while James sat out Madrid’s 4-1 thrashing of Celta that put them on the brink of the title.
But both have been included in Zinedine Zidane’s 25-man squad to face the Andalucians on Sunday.
A point will be enough for Madrid to take their first Liga crown in five years, as they also look forward to the Champions League final against Juventus in two weeks time.
And while the Wales international is not guaranteed to play on Sunday, his return to action will cheer Madrid fans ahead of the clash in Cardiff’s Millennium Stadium.