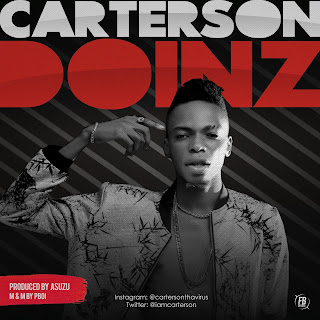 After releasing immaculate joints like #Itsekiri which is currently becoming fans favorite, Bulletproof, Fantasi and his recent Pere and Medicine covers, Young rapper Carterson from the southern part of the country unveils his smash hit “Doinz” which has already got fans talking after the radio tease on Unilagfm, Carterson teams up with Buzzing producer Asuzu on his 7th Single this year.
“Doinz” is street Lingo in the south side for having swag or spending money, Carterson delivers his usual rap laced over a fast paced beat that strikes a balance between Hiphop and a Typical Nigerian Commercial song. Prod by Asuzu and mixed and mastered by Pboi