It has been revealed that there is a church in Congo, where members drink beer to cast out demons in them. It was gathered that the members of  Louzolo Amour church, call the beer drinking session, “biéramicine” which means a mixture of beer and faith.
The church was founded by Guy Emile Loufoua Cetikouabo, who proclaimed himself God, and claims to be invisible by his followers. He is represented on earth by the current leader of the church called Charles Mikoungui Loundou.
“What we want to share with the world, is that we found a person who has the three characteristics of God, omnipresent, omnipotent and omniscient. That man is Guy Emile loufoua Cetikouabo. He was born without a navel, and that defies science,” a church member, Charles Mikoungui Loundou said.
This church bases its doctrine on the consumption of beer which they believe can be used to cleanse evil spirits. The faithful call this mixture of beer and faith, “biéramicine”.
Services which last up to 9 hours are dedicated to the healing of souls and bodies with sips of beer and praises
People come from all walks of life mainly to seek an immediate solution to all their evils.
“I arrived here sick, brother Mikoungui gave me a bottle of beer, I drank a first sip, and a second, at the third one, I went into a trance, I then felt better,” a believer, Kondi Jean- Jacques, confessed.
“I believe beer can heal, if you drink it with faith” he added.
Today, about 5,000 people attend this church that stretches across the country.
Its popularity in the Congolese society is increasingly growing, with authorities seemingly unable to control its activities. 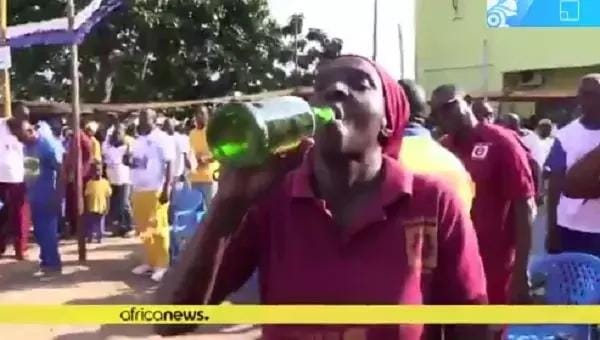