Former BBNaija ‘Pepper Dem’ housemate, Omashola Kola Oburoh, known better as Omashola, has shown his support for Laycon in a rather funny way.

The club manager and model took to his official Twitter account on Thursday afternoon to share a doctored picture of Laycon as he receives the dummy cheque of N85 million from the organizers of BBNaija.

“Biggie can you just give @itslaycon the money already”

Omashola is not the first popular figure to root for the ‘Lockdown’ housemate. Information Nigeria recalls that popular rapper, Reminisce had tweeted that Laycon is his son.

#BBNaija: Why I slept with Laycon &#8211; Dorathy Reveals 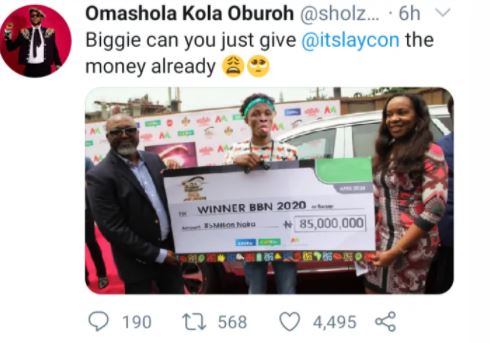