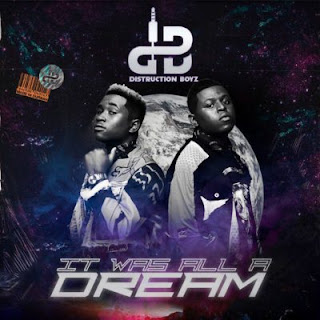 To say that Distruction Boyz’ debut album broke the internet is an understatement. The dizzyingly hypnotic, house-inflected lead single “Omunye” torpedoed straight to the top of SA’s charts while simultaneously inspiring a flock of viral videos and memes of South Africans moving to its twitchy beat. Not surprisingly, the rest of this KwaMashu duo’s debut album Gqom Is the Future went on to become the first-ever strictly gqom album to reach gold status—and in style.

This wasn’t the first time the Durban duo—made up of Zipho “Goldmax” Mthembu and Thobani “Que” Mgobhozi—have disrupted the local music scene. Widely recognised as two of the most prolific pioneers of gqom, some of their past shisa nyama bangers include “Gqom Queen” Babes Wodumo’s “Wololo” and DJ Maphorisa’s “Midnight Starring”.
Stream their new album it was all a dream for free!
DOWNLOAD FULL ALBUM HERE