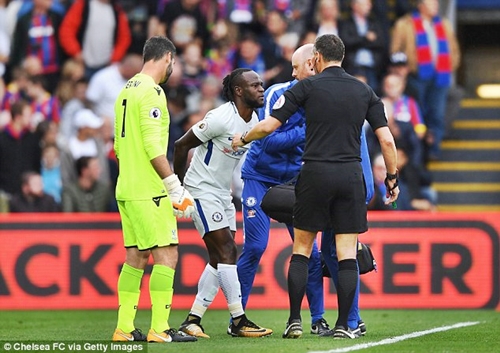 English Premier League Champions, Chelsea have blamed the management of Super Eagles of Nigeria for the hamstring injury picked up by Victor Moses in their 1-2 loss to Crystal Palace last weekend.The Nigeria international who played the entire duration of Super Eagle’s 1-0 win over Zambia during the last international round of games, left the Palace pitch five minutes before the half time break and the Chelsea confirmed report that he will be out for four to six weeks with the hamstring injury.According to Vanguard, a source close to the player said that Chelsea are angry with Nigeria for playing Moses for the entire duration of the game against Zambia, despite the forward complaining of a tight hamstring during the course of the game.“Moses was supposed to be pulled out of the game against Zambia but the injury which lead to two substitutions forced the coaches to leave him on for the entire duration of the game, which he played through the pain barrier”, he said.“He (Moses) complained of a tight hamstring during the half time break, but he had to manage it for the entire duration of the game. The rest he had after the game didn’t bring the desire result, hence the re-occurrence of the injury on Saturday.“Chelsea are understandably angry because they know how to manage him and if you can recall he was rested in the game against Manchester City with coach Antonio Conte saying he has played too many games.“When people say Moses is not committed to the course of the national team, they don’t know about his injury situation, last season he was always the man to be substituted, because they realise he needs to have enough rest for the next game”, the family source confirmed.